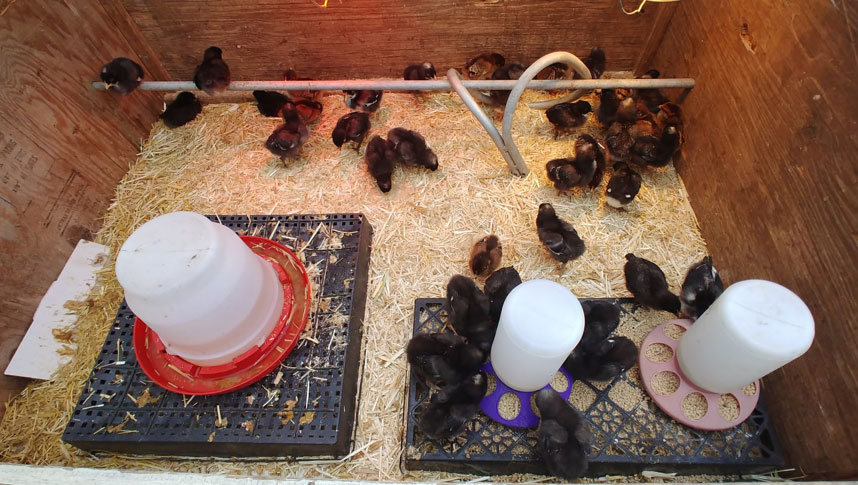 Every year I grow poultry for Thanksgiving at Nettles Farm. I try to choose poultry that is healthy, beautiful and has a wonderful taste! One year I chose Poulet Bleu chickens, truly my favorites. Another year it was Bourbon Red turkeys, not as successful. The Bourbon Reds should have tasted better than they did. My guess is that I got the chicks from a breeder who grows “show heirloom birds,” and they were not bred for flavor. Last year it was Guinea Fowl, another surprise. They grew to more than 5 lbs each (!) but they were fat and flavorful, and a treat over the holidays.

Sometime last fall, I got an email from someone in Seattle asking if I was teaching any chicken butchering workshops. I hadn’t intended to, but decided, why not? Three young high tech employees signed up for the class. Their reason for taking the workshop was that they thought they should know how to kill and process chickens if they were going to eat them. It was a fun class, complete with glasses of wine while we peeled gizzards! If you’re interested in our workshops, please check here. If you don’t see anything your interested in now, be sure to check back.

It’s time again to choose which poultry I will grow for Thanksgiving at Nettles Farm. I decided to try some black chickens—I was looking for a bird I enjoyed in Burgundy. It is a black chicken called La Fleche, meaning The Arrow, due to its fluted comb. I couldn’t find it anywhere, even though several breeders listed it on their list of breeds—no one had enough to sell. As a result, I settled on two types of French Maran; the Cuckoo and the American Beauty. The latter is a hybrid, not for breeding, but bigger than an heirloom Maran, and I thought it would be good for eating. I also got a few Barnevelders, a Dutch breed cross bred with Asian black chickens. They are also large birds, and able to be hatched and grown.

I thought this would be enough poultry for the year, but a friend managed to find 16 La Fleche chicks from a breeder in Texas. I was thrilled! Now I have 61 babies to care for. We will butcher most for Thanksgiving workshops, but keep out a few pairs for breeding this winter.